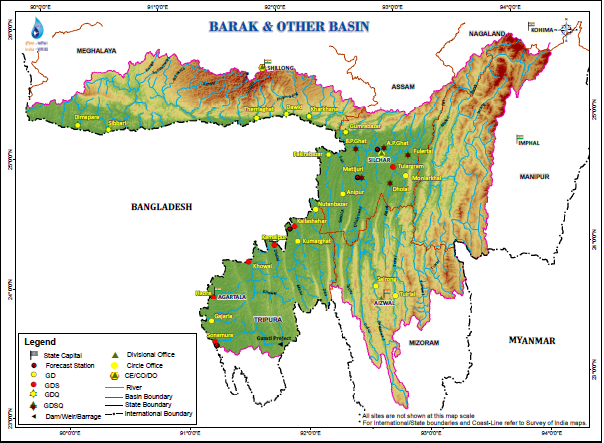 This report was commissioned for India Rivers Week 2016.  Its a short description and detail report of the same can be seen here North East Rivers Profile

RIVERS OF NORTH EAST INDIA – FLOWING TO BANGLADESH AND BURMA

The Barak River basin covers parts of India, Bangladesh and Myanmar. In India it spreads over states of Meghalaya, Manipur, Mizoram, Assam, Tripura and Nagaland having an area of 41,723 Sq.km.

The Barak River originates from the Manipur hills, from Liyai Village in Senapati district in Manipur at an elevation of 2,331 m and flows through Assam and further down to Bangladesh, where it is known by the  name of the Surma and the Kushiyara and later called the Meghna before receiving the combined flow of the Ganga and the Brahmaputra. The principal tributaries of Barak joining from north bank are the Jiri, the Chiri, the Modhura, the Jatinga, the Harang, the Kalain and the Gumra whereas the Dhaleswari, the Singla, the Longai, the Sonai and the Katakhal joins from south bank. The Barak sub-basin lies in the States  of Meghalaya, Manipur, Mizoram, Assam, Tripura and Nagaland.

The basin of Minor Rivers draining into Myanmar and Bangladesh extends over states of Mizoram, Nagaland, Manipur and Tripura having a total area of approx. 36,202 Sq.km. The Imphal River or Manipur River is the main river of the basin and it rises near Kangpokpi in Senapati district of Manipur and receives the Iril River from the south and the Thoubal River from the east. It also receives the Khuga River from the south-west and is known as Manipur River below its confluence. The Rivers of North East supports rich biodiversity as the region is located in two biodiversity hotspot, the Indo-Burma Biodiversity Hotspot and the Eastern Himalayas Hotspot. Indigenous communities also maintained unique cultural and spiritual relationship with these Rivers, other than survival dependence.

The Manipur River and the Barak River system are mostly targeted for hydroelectric generation and irrigation project, while trans-boundary Rivers of Nagaland and Mizoram, such as Tizu River and Kaladan River are targeted for water way projects, such as Kaladan Multimodal connectivity project. The Rivers of Meghalaya and Tripura are targeted primarily for hydroelectric projects. Several mega dam projects and water ways projects are pursued as part of development projects facilitating the full-fledged implementation of India‘s Look East Policy for trade and commerce with South and South East Asia. Four MoU‘s were recently signed  to  build  mega  dams  over  Barak  River  and  its  tributaries.  Increased  deforestation  and  the  pursuance  of unsustainable development projects seriously undermined the health of the ecology of these Rivers..  Mega dams already built and also proposed over trans-boundary Rivers such as the Myntdu Leshka Hydroelectric Project in Meghalaya and the 1500 MW Tipaimukh Multipurpose Hydroelectric Project in Manipur are subjected to widespread opposition from communities in downstream areas in Bangladesh. There‘s few Rivers indeed that continues to flow free.

The pursuance of these mega development projects over Rivers of North East are laden with controversies of negating the significant role of these rivers in sustaining the livelihood, survival of indigenous communities  and their intrinsic physical and cultural, spiritual relationship with the Rivers. There has been  growing assertion from indigenous communities to defend this intrinsic relationship.